A long stone culvert, built in the 1830’s on the side of Mynydd Foel (the Foel mountain), to divert toxic waste fumes from the copper smelting works in the valley. Reportedly 15 feet by 11 feet and a mile long, the fumes exited via a 30 foot high stack on top of y Foel.

During WW II Stac-y-Foel became a landmark for German bombers looking to drop bombs on the city of Swansea. As a result, it was demolished around 1940. But the remnants remained as a scar that locals saw daily.

Located in the upper Afan Valley, alongside the A4107, these small houses served as miners’ cottages. Across the street in the photo you can see the River Gwynfi.

Numerous bridges existed in the Afan Valley. At one time, one could stand in one spot in Pontrhydyfen and see seven bridges. The most prominent of these was the aquaduct that once carried water to drive large waterwheels for the blast furnaces of Cwmafan. Now a footbridge, it has been restored from years of detoriation. Another of Pontrhydyfen’s prominent bridges carried the Port Talbot Dock & Railway Company rail line across the valley. Known in Welsh as y bont goch (the red bridge).

A number of the GWR railway bridges in the Afan Valley were demolished after the Swansea Bay line closed due to the “Dr. Beeching cuts” in the 1960’s.

I’ve been unable to find information on the history of this watermill beyond the photo. I used to travel past this landmark en route to The Cimla (Neath). But it was pedal to the metal (or “full throttle”) to get up the section of hill beyond the bridge in the photo.

Located on Deport Road, near the old Cwmafan railway station. I’ve also been unable to information on the history of this building.

The hill at Ynysygwas connects the valley floor with the mountainside road A4107, known locally as “top road”. Ynysygwas is reportedly the only hill by this name in the UK. At the top of the hill is the small community of Ynysygwas. At the bottom of the hill is a bridge across the River Afan, reconstructed after collapsing.

Local folk lore has it that people coming down Ynysygwas hill on a bicycle would occasionally have their brakes fail, and they’d crash into the wall surrounding Saint Michael’s Church. They’d be propelled over the wall and find themselves laying on one of the graves in the graveyard.

Tips gwyn, or white tips in English, were the unsightly spoils of nearby mining. The tip was eventually removed and replaced with the small community of Penllyn and the Coop store.

One story (1) explains that the Ebley family owned and operated a travelling theatre that they took around various communities in Wales via horse-drawn wagons in the late 1880’s and early 1900’s. At the outbreak of WWI, the male actors left the theatre and joined the war effort, putting an end to the travelling theatre.

The Theatre was then towed to Cwmafan where it was rented to the Caerau Coliseum Company and opened as a cinema. In 1916. It closed and then reopened under the Ebley name. In 1927 the Olympic Cinema opened in Depot Road showing silent films and converted to sound in 1932. In 1970 it became The Olympic Bingo Hall.

Another story (11) claims that the Ebley family owned and operated a travelling cinema (bioscope) that they took around various communities between 1895 and 1915. The onset of WWI put an end to travelling, and two Ebley sons established a permanent cinema (the Olympic Cinema) in Cwmafan.

The tall spire of All Saints Church housed a bell that rang out for 10 minutes before Sunday morning and evening services. By the time the author was privileged to ring the bell, the original swing of the large bell against a hammer had been replaced by a hammer that swung against a stationary bell.

Air for the large pipe organ was provided by a large hand-operated bellows. In my youth, I “pumped the organ”. The bellows lost all its air when not pumped and, following a quiet prayer period, the organist would need sufficient air to hit the first note of the next hymn. The organist would rap on the side of the organ to let me know I needed to quickly inflate the bellows.

Regrettably, the limited congregation could not support two Church of England places of worship in Cwmafan, and All Saints Church was demolished in favour of St. Michael’s Church.

Mostyn Evans owned and operated a coal merchant business. Coal was delivered from the upper Afan Valley by train. Mostyn also operated a fleet of lorries, known as Mostyn’s Motors.

Built in 1907 and closed in 1987. According to Brickworks Of Wales (10), it was originally run by the ‘Eagle, Bryn and Cwmavon Brick Works Ltd’, becoming the ‘New Eagle and Bryn Brick Works Ltd’ by 1926, finally ‘Evans and Bevan’ by 1961 . The following photos are of 2 bricks from this works that were recovered from my Father’s Cwmafan home and have been placed for posterity at my son’s home.

Thomas Brothers buses were iconic, and were the main form of transport between Cwmafan and Aberafan, Cwmafan and Pontrhydyfen. The latter connected with service between Cymmer and Neath.

Not strictly in the Afan Valley, this milestone from 1841 sat roadside in Margam. 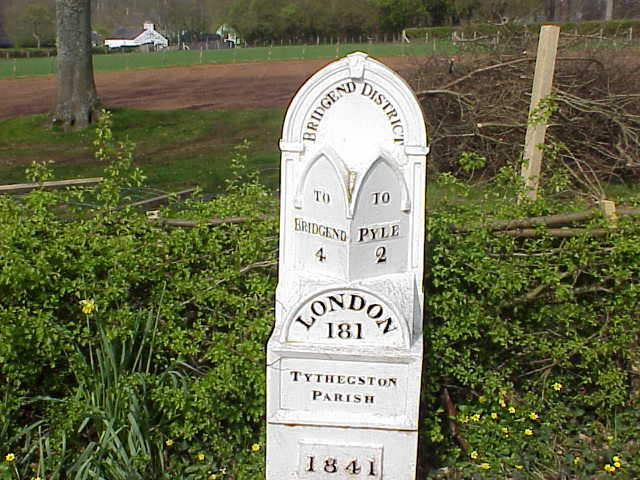